Created by Japanese game designer Tomohiro Nishikado, Space Invaders was initially released as a Japanese exclusive on June 19th, 1978, before later being licensed for production in the United States by Midway Games due to popular demand. The game turns 40 next year and whether you’re an avid gaming enthusiast or just a casual console dabbler, it’s extremely likely that you’re aware of the game in some capacity. However, few people realize just how much the two-dimensional arcade shooter helped shape and transform the gaming industry into what it is today. Moreover, the cultural impact that Space Invaders has had throughout the years is massive and the success of the shooter has spawned a wide variety of spin-offs, merchandise, and plenty of other entertaining alien-related shenanigans.

The basic premise of the game is simple: aliens are invading Earth and as they attack from the sky in their droves, you must move a laser cannon horizontally across the screen and fire at the descending extraterrestrials in order to protect the planet. You earn points with every alien that you take out, and, as the game progresses, the aliens’ movements become quicker, as does the tempo of the game’s soundtrack. The aim is to score as many points as you can so you can take your rightful place at the top of the leaderboard, which appears after you find yourself overcome by the iconic pixelated combatants.

Reasons for Its Success

Close Encounters of the Third Kind

It could be argued that the timing of Space Invaders was one of the main reasons for its almost immediate success. Prior to the release of the game, speculation surrounding the mysterious government site Area 51 was at an all-time high and with the cinematic experience of Close Encounters of The Third Kind still looming ominously at the back of people’s minds, aliens were undoubtedly on the brain. Space Invaders gave the average Joe a chance to put his mind at rest by blasting a bunch of green men out of the sky. What’s more, the game was ridiculously easy to pick up and the fact that one didn’t have to possess the skills of a NASA pilot to be successful was definitely in its favor.

Upon its release in 1978, Space Invaders infiltrated local arcades with reckless abandon and almost single-handedly displaced pinball games as the king of the arcade. It has been named the top rated arcade game by Guinness World Records due to its cultural and creative impact and is widely considered to be the highest grossing video game of all time. The game also helped restart a gaming industry which was largely in the doldrums, mainly due to the fact that the video game market was overly saturated by a number of samey Pong-based knock-offs. Gamers were fascinated by what were, at the time, revolutionary graphics when compared to the primitive ball and bat of Pong or the relatively bland Pinball screen that they had become so accustomed to.

It’s almost impossible to overstate the impact that Space Invaders has had, both on the gaming industry as a whole, and on wider popular culture. To this day, original Space Invaders arcade machines keep cropping up on the market and are being sold at exorbitant prices, presumably bought by those who remember popping down to the arcade before having a quarter tempted out of their unsuspecting pocket. In terms of spin-off games, it will come as no surprise that the list is a long one, but perhaps the most well-known is probably Galaxian, which was intended to exceed the original game and was very well received upon its release in 1979.

More recently released efforts such as Titan Attacks have successfully remixed the formula of the game whilst incorporating much more up-to-date graphics. In addition to this, the online casino industry has also got in on the act, with a number of Space Invaders-themed slot games available on sites such as Paddy Power Casino, with players being offered a casino bonus of £500 GBP via review site Oddschecker.

Believe it or not, there has also been talk in recent times of Space Invaders making it onto the big screen. Warner Bros. were reportedly set to team up with screenwriter-producer Akiva Goldsman (best known for I am Legend and the Paranormal Activity series) to somehow create a film based on the game along with its own unique characters and absorbing plot. It’s fair to assume that this idea has probably been shelved, owing to the fact that there hasn’t been any sort of update on the movie’s progress since the original news story came out three years ago. At the very least, however, this once again demonstrates that the arcade shooter is still at the forefront of people’s minds and the nostalgia surrounding Space Invaders remains very real and very alive.

If that wasn’t crazy enough, there’s also a leading street artist (somewhat predictably named Invader!) who travels around the world, pasting a wide variety of Space Invaders-themed mosaics in the middle of city centers. Quite sensibly, the French artist prefers to remain anonymous and whilst the idea sounds a little ridiculous in itself, the results are extremely aesthetically pleasing. Some of his most well-known ‘targets’ include historic buildings in Paris, the vast walls of East London, and even the Hollywood sign in California. In a recent interview with the BBC, the artist went on to explain that “the [Space Invaders] characters are perfect to be made with real tiles and mosaics” and that “Space Invaders represents to me a symbol of the beginning of the digital world that we are living in now.” He’s not wrong either. The iconic pixelated enemy alien has gone onto become somewhat of a pop culture icon and is often used as a synecdoche, representing video games as a whole.

The success of Space Invaders has also led to it being referenced in a wide variety of other arenas. The game’s soundtrack is iconic in itself and has been covered in one way or another by a number of bands, probably most notably the Japanese synthpop group, Yellow Light Orchestra. The group reproduced the sounds of Space Invaders in the hit single Computer Game, which went on to sell over 400,000 units in the United States alone back in 1978. There are also multiple television series that have referenced the game in some capacity, including Scrubs, That 70’s Show, and The Simpsons, the latter making reference to the addictive nature of the game with popular character Groundskeeper Willie explaining that he is incapable of shooting a gun because his fingers are so badly bent out of shape due to excessive playing of the game back in the ’70s.

A Legend Lives On

With the emergence of the street artist Invader!, amongst other references in popular culture, chances are that Space Invaders won’t be forgotten in a hurry, and rightly so, in most people’s opinions. The game is hugely responsible for the idea of a wide range of shoot ’em up titles that we see selling millions of copies in the modern day gaming industry. The Museum of Modern Art in New York has recognized the game’s contribution and has recently announced plans to invite Space Invaders to join its permanent collection.

In 2006, the game was selected to represent Japan as part of a project that was compiled by the Agency of Cultural Affairs, cementing Space Invaders‘ place in the Japanese history books. More recently, in 2014, two Brazilian Zoologists described a new species of arachnid as “Taito Spaceinvaders” due to the similarities the spiders shared with the iconic enemy aliens found in the game. There is little doubt in most people’s minds that Space Invaders lives on, both as a game and as a cornerstone of modern popular culture. More than anything else, we’re just praying and hoping that the film gets a green light because that would definitely be an interesting watch if nothing else! 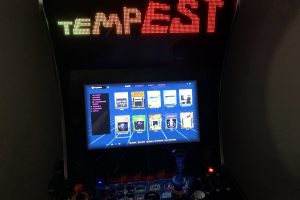 The latest update for the full-size AtGames Legends Ultimate home[...]

UPDATE: A review is posted here. Now that Atari has[...] 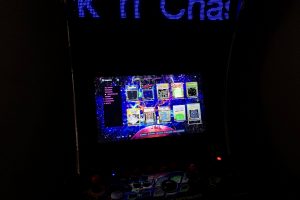 The latest firmware for the full-size AtGames Legends Ultimate home[...]