August 9, 2015 Posted by Bill Loguidice How to No Comments

The first issue was with Microsoft Money. Unfortunately, I haven’t found a suitable replacement for Money and have been using the final Microsoft Money Plus Sunset Edition since its release back in 2009. It still gets the job done and is absolutely critical to how I track and pay all of our bills (and yes, it’s on my to do list to eventually replace the thing). In any case, under Windows 10 it first pops up with an error about needing Internet Explorer 6 to use certain program features. Unfortunately (or, fortunately, actually), Internet Explorer 6 can’t be installed on Windows 10. The solution is a simple registry fix, which is detailed here. Sadly, that wasn’t the final step.

When I tried to download the latest transactions from one of the two banks I use, Money crashed. No matter what I did, every time I started Money, it would crash (and subsequently crush just a bit more of my soul). Fortunately, going here, I was able to fix the final issue with it by replacing a DLL file. The direct link to the DLL and instructions on how to replace it are here.

With that solved, it was now onto eliminating the second issue, and that was with being unable to move icons on the desktop. As a user of Stardock Fences, despite what you might read on various forums, I found the easiest solution simply being to download the latest version of Fences from my Stardock account, install it over the old version, and reboot as instructed. With the updated version of Fences, I was again able to move icons on my desktop, and specifically to the fence I wanted to move it to. All of my previous settings (and icons) were retained without issue.

The third issue was the most minor and that was the screenshot feature of Evernote. Normally a Windows key + Print Scr will allow a capture of all or a portion of what’s on your screen. It seems that that combination is in conflict with what Windows 10 wants to do with it, so I had to change the hot key in Evernote to Ctrl + Windows key + Print Scr. That worked just fine as you can see from the featured image at the top of this very blog post.

Windows 10 has already proven itself a fantastic operating system, but, as with any major change, unexpected issues do crop up. Hopefully they’ll continue to be fully resolvable like these three were. 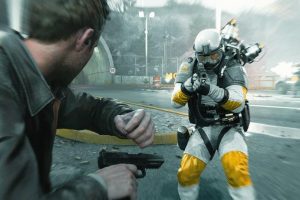 I’ve been seeing a lot of confusion on social media[...]