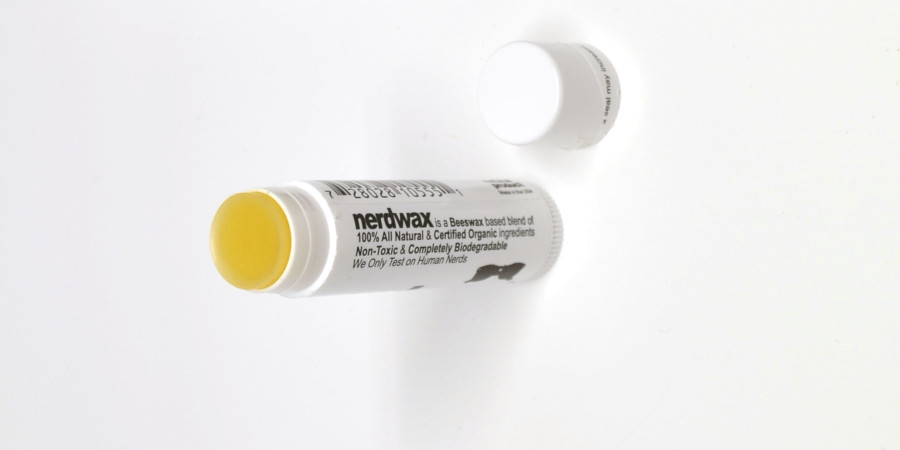 Both successfully Kickstarted and pitched on ABC’s hit TV series, Shark Tank, Nerdwax has gotten more than its fair share of buzz for such a simple idea. Basically, it’s like ChapStick for eyeglasses, except instead of helping to lock in moisture, Nerdwax helps keep said glasses from sliding down your nose, which is rarely a good look.

While you might ask why don’t you get eyeglasses that fit your face better, some people simply have noses that don’t properly accommodate eyeglasses, no matter how well designed. While I usually don’t have major slippage, my oldest daughter does. Even if your eyeglasses are well designed and your nose accommodating, over time, your eyeglasses, sun glasses, protective eye gear, etc., may still slip due to oil build-up, sweat, or even how your face might change subtly (e.g., swelling) throughout the day. So yeah, it’s more or less a universal problem, which is probably why Nerdwax got the kind of traction (pun intended) that it did.

The inside of the package.

Nerdwax boasts of its all natural and certified organic ingredients in its beeswax-based formula. I’m no believer in the purported benefits of organics myself, but I do care that a company takes pride in their ingredients, which this company clearly does.

Application is simple using the edge of the waxy stick to apply a little or a lot to the inside bridge of the eyeglasses, then putting said glasses on as usual. Depending upon how much you apply, your activity level, and the vagaries of your own skin, it should last about an hour to all day. In testing on my own glasses I got a little over an hour before I noticed some sliding, while my oldest daughter got a bit longer. As an extreme case, it didn’t stop all of her slippage, but it certainly did help reduce it.

Nerdwax in all its glory.

While you do notice the Nerdwax substance when it’s applied to your eyeglasses, it’s not particularly annoying or distracting, and certainly does offer the benefit of not having to fuss with your glasses, or others’ glasses (much to her chagrin, I push my oldest daughter’s glasses back up her nose all of the time), quite so much. It’s clearly no miracle product, but it does work, albeit a bit too briefly versus how long I’d really like it to. Re-application, at least, is trivial, and it’s equally easy to wipe it right off if it doesn’t dissolve naturally on its own (and, in general, while it’s more or less just on the bridge of your nose, it’s actually a good moisturizer). Considering one stick of Nerdwax is estimated to last six to eight months of use, it’s definitely worth at least one purchase to see how well it works with the vagaries of your glasses, skin type, and activity level, and ultimately whether it will find a permanent home in your pocket or purse.

Thanks to Coco Joy for the review unit.