Although I stated that my next review segment would be on the Dual Pro 3D printing head of the ZMorph 2.0 SX, I’ve had to take a detour due to a technical issue that can only be resolved through a replacement part. Instead of waiting for said part, I decided to move onto the laser toolhead, which technical support said should not be dependent upon the faulty component. On a related note, interestingly, although the supplied Dark Blue PLA filament worked for several tests, it eventually became too slippery to use. I confirmed this by trying to use it on another 3D printer I have. It’s a very strange defect.

This is a preview of the Dual Pro’s 3D printing capabilities. It’s a pity I can’t finish that portion of the review for now.

Anyway, after my prior first look, unboxing, initial setup, and extended review of basic 3D printing of the remarkably versatile ZMorph 2.0 SX Full Set, I’m now ready to tackle a review of the laser toolhead option, which allows not only for engraving various materials like wood, leather, and plexiglass, but also for cutting various materials like PVA foil, paper, and cardboard.

To start, I followed these instructions in the Knowledge Base. Note that I had trouble removing the toolheads unless, based on the suggestion from tech support, that I also loosen the screw above the screw with the butterfly nut that needs to be removed. Once that was loosened, the toolheads came right out.

Per the instructions, I installed the laser toolhead, although I wasn’t quite sure where to put the breakout box (for now, I have it on the top of the unit). I also installed the included plywood table in place of the glass printing bed for extra safety (no chance of laser reflections for one). That was easy thanks to the magnet-based system.

With installation out of the way, I proceeded to place the material I wanted to engrave, which for the first test, was a piece of cardboard. Instead of using double-sided tape, I decided to use some Blu-Tack to secure the cardboard to the plywood table. I decided to try the built-in Burn Calibration Pattern test after doing the ominous sounding “arm laser.”

(By the way, don’t forget to review the safety and materials guidelines!)

As is par for the course at this point, I forgot a few things and the Knowledge Base didn’t necessarily make it clear. First off, I forgot to attach the front and rear fans to the laser toolhead, although I’m not sure they’re necessarily needed (or even used). Second, the piece of cardboard I used was both too small for that test and too thin, which scorched some of the plywood table. I addressed both issues.

One thing I’ll note is that this laser engraving/cutting process creates really smelly fumes, so definitely have some fans and good ventilation.

For the first real test print, I flipped my cardboard over and ran the laser_placing.gcode file that’s built into the printer. That created a pattern similar to what’s on the plywood table.

The next print was ZMorph_engraving.gcode, which was the one other file built into the printer. I just let it engrave over the laser placing pattern.

Now it’s time to move onto using the Voxelizer software.

There are two laser workflow options in Voxelizer that I’m aware of, and that’s image etching and laser cutting. First, I wanted to try image etching. The tutorial here was my guide, although I used my own image and material.

The image and settings for the block of wood I used. We recently replaced our fence, and this was some leftover material.

Additional settings as I print directly from Voxelizer over USB.

The software was rather confusing. It took several tries to get the Z axis set correctly, and even then for this run I set it way too high.

The @zmorph3d laser toolhead in action. I still have more settings to perfect, but early results are promising. #make #making #laser

It still worked, but not quite as well if I set it perfectly. This could definitely use more of a step-by-step tutorial. Nevertheless, this is something that with some additional experimentation, I think I could more or less perfect. As a result, I decided to abort laser etching the wood for now and experiment more with the cardboard.

I loaded up the same image and worked out how to set the work Z stop more or less correctly. The other settings, like work speed, I set with my best estimate based on the material.

The gcode display of the in-progress print.

As you can see from the photo of the end result, it came out decent for my first real laser etching. I think with more tweaks (particularly to things like depth) and more interesting material, the results would be even better.

Now it was time to try some simple laser cutting.

Unfortunately, although the tests that follow were successful, I still wasn’t quite sure how to control the laser’s depth, which I eventually figured out was related to the work speed of the laser, which you’ll see in the later screenshots (I thought travel speed might also be a factor, but slowing that down resulted in a lighter burn line). So, instead of cutting, the first few passes were more top layer etching (marking), while the later passes were more in line with what it was supposed to do, although still nothing like cutting.

Trying some text editing and placement.

You can read more about text engraving here.

Next, I tried some files from the laser cut stickers article, although I stuck with the cardboard as the target.

The end result. Too light.

The end result. Better (and note the interim test to the right).

As before with the 3D printing, this was not exactly smooth sailing. It’s a simultaneously frustrating and exciting process, with a fairly dramatic learning curve the more you want to take advantage of all of the features and troubleshoot and eliminate all of the issues that crop up. Once that time consuming stress is out of the way, though, it is pretty awesome. I definitely would want more time to work on truly understanding the settings, though, as this is not necessarily a straightforward learning process. I’d also want to develop some type of ventilation system, because laser etching and engraving really does generate a lot of fumes from the process, something akin to a strong wood burning fireplace.

I’m going to end with the usual Pluses and Minuses, but again, this is just one of a series of reviews on this printer, so I only consider those a reflection of this single function of many. Next up is the CNC routing functionality! 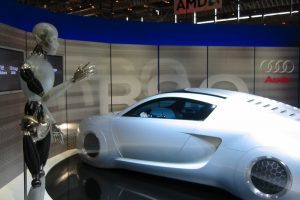 Although I’ve written about 3D printing extensively here on Armchair[...] 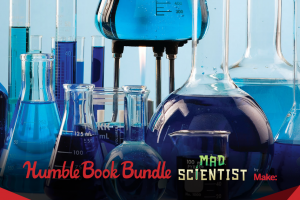 Pay what you want for The Humble Book Bundle: Mad Scientist by Make:

The Humble Book Bundle: Mad Scientist by Make: Here’s the[...] 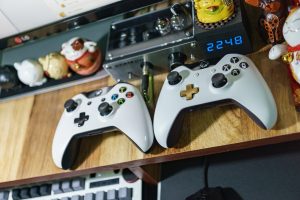 There are many reasons why gamers across the world love[...]