Activision’s Keystone Kannonball prototype from 1983 for the Atari 2600 to be finished as Dan Kitchen’s Gold Rush!

Activision's Keystone Kannonball prototype from 1983 for the Atari 2600 to be finished as Dan Kitchen's Gold Rush!

Activision’s Keystone Kannonball prototype from 1983 for the Atari 2600 to be finished as Dan Kitchen’s Gold Rush!

Dan Kitchen, author of some of the most advanced Atari 2600 games from back in the day (and who has worked on over 240 games in his career), recently posted on Facebook that he’ll be finishing up the previously lost prototype cartridge, Keystone Kapers II (1983), the sequel to his brother Garry’s well-received Keystone Kapers (1983). You can read more at Dan Kitchen’s website here and also sign up for his newsletter.

Dan Kitchen here! Some of you may know of my career at Activision in the early 1980’s as a Game Designer and creator of such 2600 classics as CRACKPOTS™, GHOSTBUSTERS™, KUNG-FU MASTER™, CROSSBOW™ and F-14 TOMCAT™!

Last year I located a long-lost prototype cartridge of KEYSTONE KAPERS II which I started at Activision in 1983, just before the infamous video game crash. You can read about the prototype at the following link:

I’m now finishing the game and will release it later this year as a brand new Atari 2600 cartridge entitled DAN KITCHEN’S GOLD RUSH!™. The game will be available as a cartridge in box complete with a poster and collectible GOLD RUSH™ Trading Card. You’ll also be able to earn three unique patches for achieving score plateaus, just like we did at Activision in the 1980’s.

In the game the player controls Kasey O’Kelly (the cousin of Keystone Kelly) as he runs on top of and through an Old West Train in search of stolen gold bars. He must find all the bars and return them to the Gold Car before time runs out. Each new level will present the player with a new train, new train cars and new challenges.

The video here shows all 47 train cars that will make up the trains in each level of the game. As you can see, some of the coach (green) and dining cars (red) are connected which will allow for game play inside and between those train cars. Additionally, colored hatches appear on top of some of the cars which allow Kasey to climb down inside those cars in search of the missing gold bars.

Be sure to visit my website www.dankitchengames.com and subscribe to receive updates on the upcoming release of the game.

Until then, Kasey and I will be working on the railroad!” 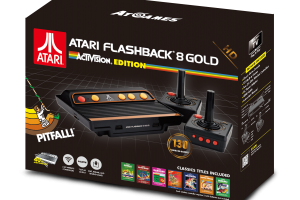 The Activision Edition of the Atari Flashback 8 Gold is now available!

The Activision Edition of the Atari Flashback 8 Gold is now available!

To help clear up any confusion, yes, the Atari Flashback[...] 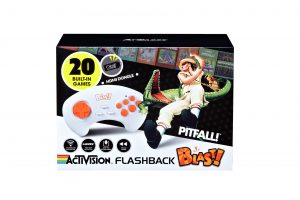 The official game list for the AtGames Activision Flashback Blast! (2018) [NOTE: All are[...]