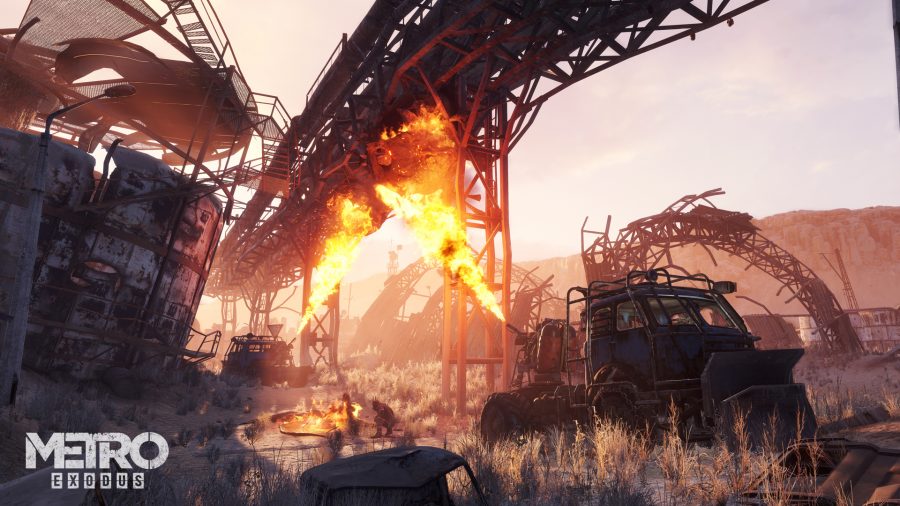 In February this year, another Metro game was released. This time, 4A Games decided to change the depressive and claustrophobic surroundings with several new and unexplored areas. And they did a pretty good job.

If you are a sucker for horror like me, you will find Metro Exodus to be one of the better games of the genre released this year. Ever since the first game from Metro franchise was released in 2010, 4A Games have proven to be outstanding game developers.

The game inspired by Dmitry Glukhovsky’s novel takes us on a journey through a demolished post-apocalyptic Russia. Now, this game isn’t for everyone. If you like a risk but have a weak heart, maybe it’s better to, for example, turn to some reliable online casino. Because in cruel surroundings filled with monsters created by nuclear fallout, the only thing you can rely on is your ammo.

One thing all three Metro games share is brutally good graphics. The PC version comes with an original art book and soundtrack that will leave you enchanted.

Metro 2033 transfers you to somber ruins of Moscow sprinkled with snow and pollution. This exterior follows you through Metro: Last Light. And in Metro Exodus, you finally get to leave it with a decrepit steam train named Aurora. That rattletrap takes you along the Volga river to the ominous countryside.

The Aurora will make several stops, allowing you to explore and wander off the path. Though some might find the size of maps unfulfilling, details incorporated in each of the places help you see the possibilities of the 4A engine. You’ll see the light, weather, and atmosphere change regularly.

However, characters and elements of survival did not evolve as much. Ammo and combat systems share too many similarities with earlier games, which can be a little disappointing for some.

If you’ve already played any game from the Metro franchise, you know the story is placed in the world destroyed by war. Every sequel follows Artyom’s struggle to survive in post-apocalyptic Moscow. Metro Exodus takes it’s players further.

You finally get to see the rest of this broken world, where the remaining members of humankind are fighting with mutants and each other. They are divided into factions, some of which work for their obscure agendas.

Artyom, his wife Anna, and the crew of surviving Rangers are traveling outside of Moscow to find a new home. Through the game, Artyom comes across many unexpected revelations that take him alongside the Volga, through the mountain of Yamantau, taiga, and drained Caspian sea, to the Dead City. Other than Anna, Miller is one of the familiar characters present in this game as well. But you will also encounter new faces like Alyosha, Tokarev, Yermak, and Duke.

Considering Metro Exodus incorporates exploration of this new world we didn’t know existed, for me, it was a bit unsatisfying that shooting was still the main point of every encounter. There aren’t many other options to defeat the enemy, both human and mutant.

Even though you will get an adrenaline rush during the combat, the fact that you might often get short on ammo can be frustrating. The good thing, however, is that you can mod your guns, creating your own personalized weapon for mass destruction. You can also strip the guns of your enemies and incorporate their parts into yours.

Another novelty this sequel brought are mutants named humanimals, creatures that will chase you in packs. These are pretty slow beasts that are easy to kill. Unfortunately, you might get bored fighting them, but the one you encounter as you approach the end of the game is quite ghastly.

Metro Exodus offers two possible endings. “Your destination” is a good ending, and you might get it if you save at least two of the companions you encounter in different areas you visit. You’ll meet Duke in Volga Chapter when he joins Artyom on Aurora after persuading the leader of Water Tsar’s Church to lower the bridge.

In the Caspian Sea Chapter, Artyom’s companion will be Damir, and Alyosha will join him in the Taiga Chapter. Artyom will save them with a transfusion and meet colonel Miller in a vision. In it, Miller asks of him to bury his body near the Baikal lakeshores, and he fulfills his request after he wakes up.

In the very end, Artyom says that the new home him and the Aurora crew discovered is too big for them. You get a hint that they will return to Moscow and start a battle against the Invisible Watchers to create a new order and save their people.

This ending is named “Eternal Voyage.” It will happen if the player doesn’t save at least two of Artyom’s companions. In this ending, instead of meeting with Miller in a vision, Aurora runs over his body, and he wakes up in the afterlife, which is the darker version of Aurora. He’ll meet familiar faces like childhood friends and Miller, and an ever-spiritual man will tell him his journey will never end.

The train stops at the station with Artyom looking at a Lake Baikal postcard. In reality, he and Miller are buried together at the lake, and the crew performs a firing salute in honor of their fallen comrade.

Overall, I found Metro Exodus quite enjoyable when it comes to visuals. However, the story and combat elements could get better. But if you are a true FPS fan, this might not be a big of a deal for you.