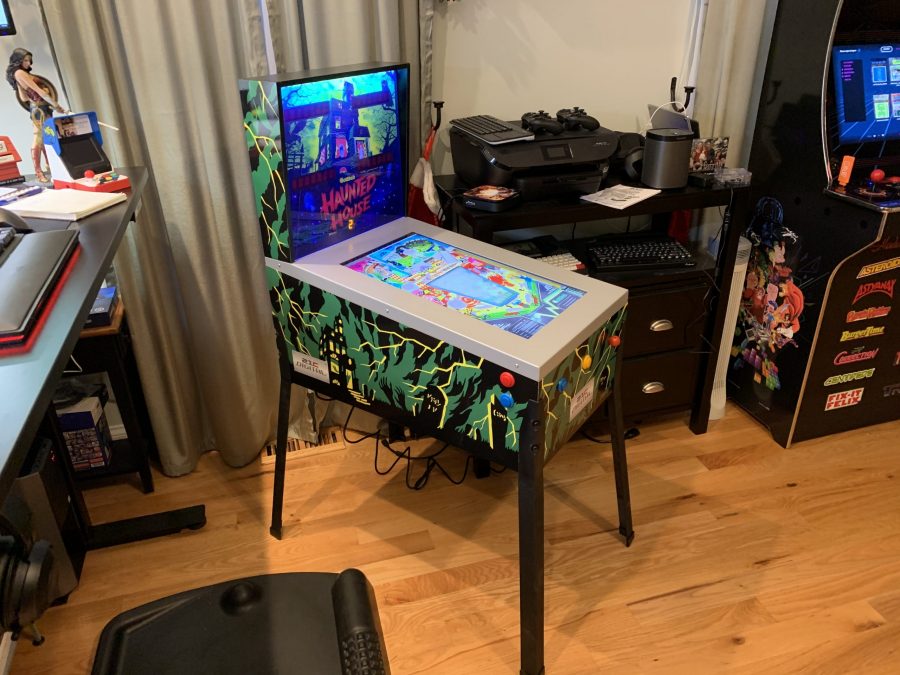 Despite FedEx and Walmart saying it was first going to come on a Tuesday, then a Monday, then a Tuesday again, the new Toyshock 3/4 scale 12-in-1 pinball machine actually came on a Sunday morning. I was able to build it with my wife that Sunday evening.

It came packaged inside of a long box that’s a bit awkward to move because of its weight, so it really needed the two of us. It felt solidly packed prior to opening it.

Here are some specs from the shipping container:

The colorful box inside the packing carton is really nice looking.

In a nice touch, the simple assembly instructions were printed both on the box flaps as well as in a separate manual.

It’s a bit awkward taking everything out of the box, but again, a big positive is that it all seemed well-packed. That’s the most import part, obviously.

After unpacking, you flip the body over and screw in the four legs, first removing the protective plastic from the corners. For this step, however, you do have to be careful, because the artwork appears to be a simple vinyl wrap and it’s easy to accidentally pull the sticker off with the protective plastic.

With the legs attached, you flip the body upright. This part is a bit tricky and again really needs a second person so nothing gets damaged. With the unit upright, it’s a simple matter of attaching the backboard.

After that, that’s pretty much it. You just have to insert the AC cable to the power brick attached to the underside of the unit, plug it in, and power on. It’s a nice, simple process.

Once fully assembled, despite its modest weight, I noted it was quite stable using the included legs. And, despite being a 3/4-scale unit, it does come up to a reasonable height and I definitely agree with its stated goal of being accommodating both kids and adults up to the low six foot range in height. In fact, in comparison to the Arcade1Up 3/4-scale stuff, this somehow looks less toy-like and a bit more imposing, and no need for a separate riser.

With the above in mind, however, some people have boosted their machine’s legs up with furniture risers to give it a little extra height, so your mileage may vary. As for me, at a little over 5 foot 9 inches tall, I had no issues. My youngest daughter, who’s 5, did have her belly hit the center START button quite a bit, which frustratingly pauses the action, when standing normally at the machine. As such, she benefited from standing on a short stool, which she needs when playing on the full-size Legends Ultimate home arcade machine to more easily reach the control panel.

There’s a power switch on the right side of the unit under the backboard. Once powered on, the backboard lights up and the main screen in the body shows the boot-up process. The startup sequence is finished once The Who’s Pinball Wizard starts to play. This licensed song is an unusual and thoughtful touch, although despite the presence of stereo speakers, does sound like it’s being played on an old AM radio, with little-to-no presence, clarity, or bass. After you’ve had your fill of the song, you can press any button on the body to get started.

You can then pick any of the 12 built-in machines. You have a choice of Big Shot, El Dorado, Centrigrade 37, Black Hole, Jacks Open, Goin’ Nuts, Haunted House (which the artwork on the cabinet is already themed to), Victory, Bone Busters, Lights..Camera..Action, Class of 1812, and TX Sector, all from Gottlieb. This appears to run a modified version of the Android release (or equivalent) of Farsight Studios’ Pinball Arcade. It has an intuitive, visual menu system, so there are definitely no complaints there.

The main body has a 24″ LCD screen. The viewing angles, color, and brightness are all reasonable, especially when looking straight on while playing. There’s a generous 3-inch silver bezel around the monitor, which looks better in person than it does in photos. I suspect it would have looked better in black, however. Either way, while the bezel is chunky, it does provide a nice protective barrier for hands, so I suggest having something of an open mind if your first reaction is shock at its size.

There’s no dedicated volume slider, just software volume control. While some have complained that even at its loudest setting the volume is too low, I find in the 40% – 60% volume range to be perfectly adequate. Again, this is not a hi-fi system with any type of bass, but the sound is definitely passable.

The plunger is a bit weird, but functional enough, giving you the ability to pull it a little or a lot for skill shots. There’s also a slight delay/lag with the flippers, no question. It seems some games feel like they have less lag than others, e.g., Haunted House feels like it has less lag. This lag may be reason enough for someone not to get this machine, but I feel like it’s something most people can adjust to.

Visually, some of the graphics, which may only display at 720p, are a bit muddy and jagged in places, and I’m not sure this exceeds 30 frames per second for its motion. It’s not too bad overall, though, especially at this price point.

While the company advertises a 3D effect. I just don’t see, and I know I’m not alone. The playfields are very flat looking, with some tables, like Black Hole, looking really flat, with no sense of depth. Again, at this price point, I wouldn’t expect much more, but it still would have been nice if they came up with some more clever tricks to amp up the visual quality.

There are two dedicated flipper buttons, as well as three nudge buttons. These are all standard arcade-style buttons and work well. Unfortunately, there’s no force feedback or rumble effects of any kind. Whether that bothers you at this price point is up to you, but it is something to note. While you are getting a pinball machine form factor here, this is straight-up video pinball with no tactile flourishes beyond the pressing of the buttons.

Finally, the backboard has four segmented LED blocks. While it would have been nice to have another screen here, again, it’s understandable at this price point.

Overall, I’m having fun with this machine. I accept its shortcomings. Having previously owned a Zizzle, I consider this the next logical successor to that type of easily movable home pinball machine. With that said, it will be interesting to see some of the improvements a 2.0 version might bring. There are also lots of rumors that several other companies will be announcing home pinball machines in 2020, including some at CES, so that’s something else to keep in mind. Of course, for the relatively modest investment this entails, it wouldn’t be the end of the world if you wanted to sell this machine should something more appealing come out next year. As long as you’re aware of its limitations, you should still get quite a few months of fun out of it in the meantime. 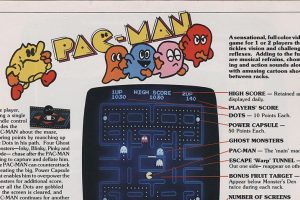 Arcades were the start of a revolution of gaming which[...] 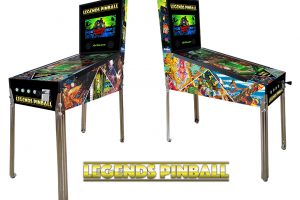 AtGames has released more details on their upcoming Legends Pinball[...] 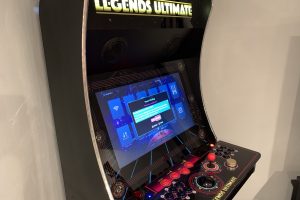 The weekly update for the AtGames Legends Ultimate is now[...]