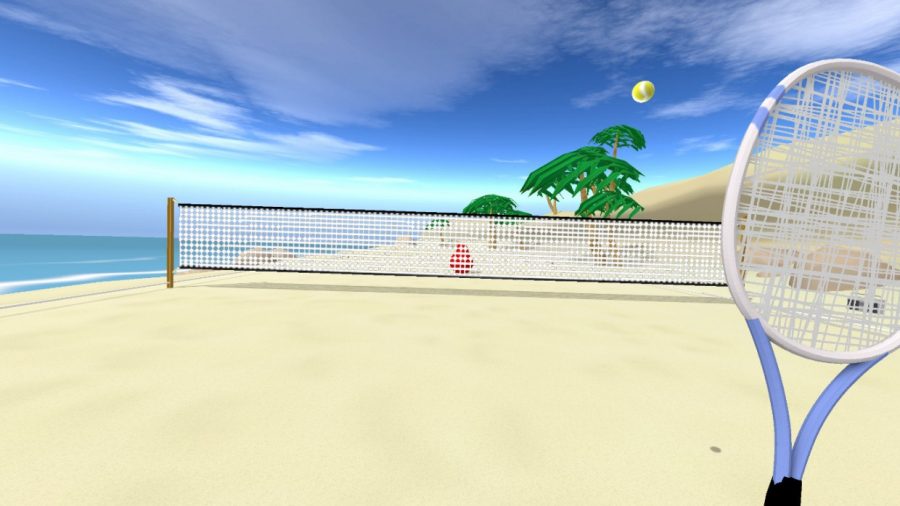 This review was originally created in May 2018 for HTC, targeted to their original Vive/Vive Pro (VIVEPORT). It is reproduced here without alteration.

Blobby Tennis is like a simplified mash-up of one-one-one beachside volleyball, badminton, and tennis. Because you’re playing on sand, there’s no ball bouncing other than on the racket. You either keep volleying the ball back and forth in the air or it falls. Like any casual beach sport, keeping track of the score is up to you.

The game gets its name from your opponent, a red blob named Blobby. You’ll occasionally hear simple outbursts like “Ha!” from Blobby when he (or she) either misses the ball or messes up a shot, but he’s otherwise barely visible on the other side of the net and rather lacking in personality. And like Blobby’s personality, the graphics are functional, but also of a rather basic and uninspired construction.

Once the game starts, it immediately gets down to business. There’s no real options or setup to worry about, although you can stop the music and change your racket versus ball hand. You then can either try and bounce the ball on your racket or lob the ball over to Blobby to try and start a rally. Physics-wise, the ball reacts well to the racket, with the sparse, but effective sound effects adding to the illusion of playing something resembling a real-life sport. And since you’re on a beach, you hear the sound of waves crashing throughout.

Whether or not the game’s simplicity is a positive or negative depends on what type of experience you’re after. For many players, long-haul VR sessions can be exhausting, so something simpler that can be played and enjoyed in short bursts is a positive. This positive extends to the game’s accessibility. Swing the racket and hit the ball. It’s like a VR callback to arcade Pong’s legendarily simple play instructions of “AVOID MISSING BALL FOR HIGH SCORE.”

On the other hand, once you’re actually playing, the game’s high difficulty definitely falls more clearly into the negative category. While it’s easy to bounce the ball on your racket or serve, it’s actually really difficult to return a ball from Blobby, let alone have any type of sustained volley. It’s also difficult to judge power when using your racket, requiring a certain discipline in the heat of action to not send the ball flying way out of bounds. If you want a relatively high challenge, this is it, which belies the game’s otherwise simple nature.

Another consideration is available room space. As you would expect for a racket-based game, this is meant to be played while standing within a larger room-scale setup. That means you’ll have to be especially careful how much you move in a smaller room with potentially breakable objects or motion controller-damaging walls or ceilings. Fortunately, in regards to the latter, you can mostly keep to side, rather than overhead, shots, to best play this game.

On the plus side, Blobby Tennis is one of the few games that presently supports the Vive Tracker and the Racket Sports Set. Although I was not able to test this particular option, I imagine holding a well-balanced faux racket instead of the standard motion controller would increase the fun factor here considerably, and likely add at least one more star to my rating. Of course, adding such a racket – which is longer than a standard motion controller – would also increase the amount of room space required.

Despite the relatively low review score, Blobby Tennis is definitely fun in short bursts. Just don’t expect too much more.

Blobby Tennis is free for HTC Vive owners, and is available on Viveport. 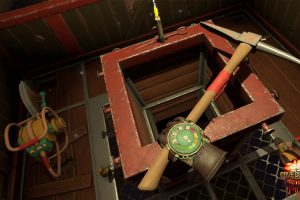 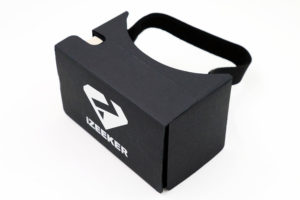 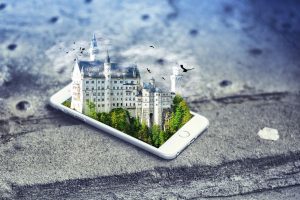