Atomicom’s Switch Galaxy Ultra is a futuristic, track hopping race-against-the-clock and collect-em-up for the Sony PlayStation 4 (PS4) and Vita, which was released on December 17, 2014, in Europe, and February 24, 2015, in North America. I’ll be reviewing the North American version on both platforms.

Switch Galaxy Ultra on the PS4

Both versions of the game are locked down to a smooth 60 Frames Per Second (FPS), with the PS4 version sporting full 1080p resolution. Regardless of whether you own a PS4 or Vita (or both), it’s a Cross-Buy game, meaning that you buy it once on either platform and you own the game on both. As expected, there’s also a discount on the purchase price if you’re a PlayStation Plus member (and if you own a PS3, PS4, and/or Vita, it would be silly not to be). Most other PlayStation-specific features are supported, including Cross-Play, Cloud-Save, and two modes of Online Multiplayer with leaderboards.

Switch Galaxy Ultra on the Vita

For a game clearly inspired by classic action games, the back story is suitably straightforward. You play as Vince Vance, one of the last remaining humans and one of Dakur’s best pilots. Head of Dakur Technology, Amur Ness, has tasked you with going out into the galaxy and collecting the valuable element tantalum, which allows you to travel been cities (the courses).

Switch Galaxy Ultra on the PS4

There are 55 levels featuring elements like speeds-ups, teleports, jumps, enemy ships, and bombs. You can earn credits as you play to unlock a total of six new ships with upgradeable skins and stats.

Switch Galaxy Ultra on the Vita

The track designs remind me a bit of Hewson’s multi-platform classic, Eliminator (1988; I played the Commodore Amiga version the most), while the art aesthetic, from the ships to the backgrounds, are unmistakably inspired by Psygnosis’s legendary multi-platform Wipeout (1995 and beyond) series. This is no coincidence, as Switch Galaxy Ultra‘s cities were designed by Wipeout‘s cro-creator, Jim Bowers, and you’ll also be able to unlock digital comic content featuring seven mini episodes of Vince’s travels around the galaxy that were designed by Wipeout‘s original concept artist, Darren Douglas.

Switch Galaxy Ultra sample digital comic page. On each system, the individual comic panels are zoomed in for easier viewing.

While there are no instructions for the game anywhere that I could find, there is a helpful in-game tutorial (I’d be shocked if the female voice actor giving the instructions wasn’t the same as Adventure Time‘s BMO!). Even without the tutorial, the controls are simple enough to master. Your ship, which you steer with either the d-pad or left analog stick (the left and right bumpers can also be used to change lanes), is constantly in motion. When you start to fill your boost gauge, press the X button to use it. To brake, press the circle button. The basic goal is to stay on any of the available tracks, avoiding missing portions (gaps) and other obstacles. Once you make it safely through a portion of the track, you’ll enter a wormhole, where your ship can move freely to collect as many tantalum orbs as you’re able to before returning to said track. The faster you make it through a course, the more credits you’ll earn for ship upgrades. When you’re back at the map screen, you can then spend tantalum orbs to compete at additional cities/courses.

Fortunately, for when you don’t feel like dealing with things like choosing courses and ship management in the main campaign, there’s also an almost Zen-like game mode called Survival that lets you simply race – until you run into something – for a high score and credits. Unfortunately, since it’s such a new game here in North America, I was unable to find an online multiplayer game to test that functionality in time for this review. Whether that mode proves worthwhile depends of course on how popular the game becomes, but it’s not something I’d necessarily count on being a go-to option.

While I would have liked a slightly greater sense of speed, visually the game is undeniably a looker with superb draw distance and the aforementioned frame rate keeping the action buttery smooth. Audio is dominated by a take-it-or-leave-it high energy techno soundtrack that seems par for the course for this type of game, with the sparse sound effects very much taking a back seat. Either the music or sound effects (or both) can be toggled off in the Main Menu’s Options.

While some may find there’s too little to do in this game, I think there’s an audience out there like me who will appreciate the simplicity in its design that harkens back to the more immediate gratification of vintage videogames. There are few controls to learn and its progression system is straightforward and logical. This is a game for those who like challenges and a “just one more play” vibe without unnecessary design layers or frustration that just a little more practice can’t overcome.

Special thanks to Atomicom for the review code. 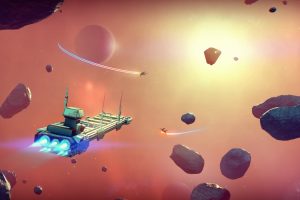 The vast world of outer space and its unknowns have[...] 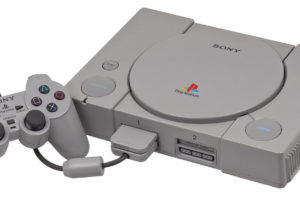 Inspired by my colleague’s video of his thoughts on the[...]