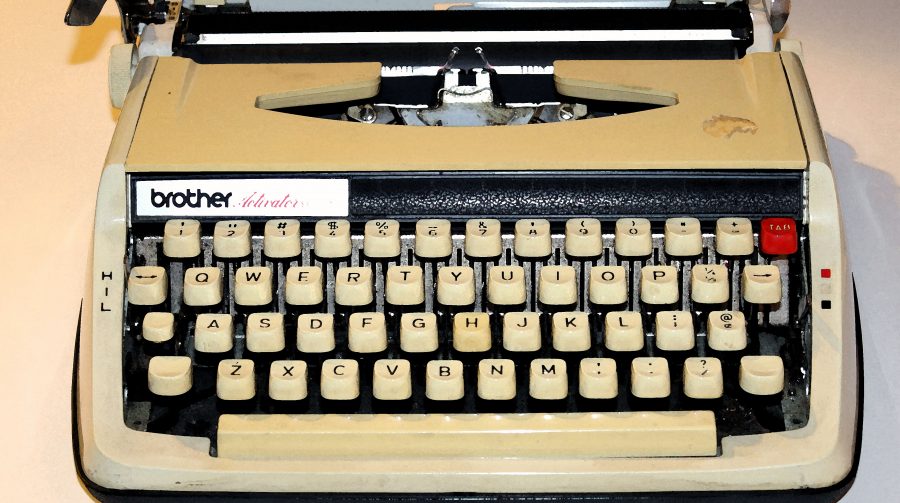 After reading Matthew G. Kirschenbaum‘s excellent Track Changes: A Literary History of Word Processing, fittingly on my Surface Pro 3‘s Kindle app, I was inspired to share my personal history on the subject. In the book, Kirschenbaum details the history of word processing from the standpoint of the famous writers – consisting mostly of fiction authors and poets – who pioneered the use of the technology in their work.

While the book mostly focuses on word processing from its primitive origins in the 1960s to its modernization and homogenization into the 1990s, my own history is naturally restricted to my lifetime, which began back on October 11, 1972. As such, like many of the writers featured in the book, my earliest attempts at writing were restricted to pencil or pen and paper, with a little bit of mechanical typewriter thrown in for good measure. Interestingly, even after I had access to solid word processing technology, my writing still almost always began with pen and paper before being transcribed to a digital format. It was only in the latter part of the 1990s, when I was well and truly steeped in the working world, that my writing process became digital from start to finish (“breaking” my handwriting in the process, which I previously detailed here).

Growing up and going to school as I did primarily in the 1970s and 1980s, I bore witness to sometimes awkward transitions. As you would expect, almost all writing assignments were handwritten, often requiring tedious and complete rewrites – even with use of a pencil – when more than a few mistakes on a page were made, and particularly when significant additions were needed. Erasable pens were around, but with ink that would just as easily adhere to your hand as it would to the eraser. With regular pens, Wite-Out was a possibility, but too much was discouraged for obvious mess-related reasons.

While I don’t recall writing much school work on our manual typewriter, we did get a second-hand electric typewriter at some point that did see a little more use in that regard. My lack of typing proficiency and the fact that errors were just as easy to make and not all that easy to correct in large quantities made its use no more practical than hand writing my assignments. That electric typewriter was my first exposure to something better than Wite-Out, though, and that was a two-level ribbon (it might have even been three, because I vaguely remember red being on there too) that allowed you to overwrite the black letters with a white ribbon, and then switch back to the black part of the ribbon and begin again.

My first computer was a Commodore VIC-20, which I got early on in fifth grade, when I turned 10. It was the basic unit with just the computer itself and nothing else. I programmed a little on it (losing my typed programs when the computer was powered off!) and played a few cartridge games, but I soon sold it to a classmate to get a Commodore 64. This too was limited for a time until I got a Commodore 1541 disk drive (thanks to a paper route) and Commodore MPS-803 dot matrix printer (a Christmas gift). I finally had my own feature complete computer.

I primarily used the Quick Brown Fox cartridge-based word processor (there was also a cassette with boilerplate), which was, to say the least, quite frustrating (at least we got it for cheap at a computer show). I did experiment with other word processors through the illicit passing of copied disks at the schoolyard, but nothing was particularly user friendly. In fact, the very first computer-driven assignment I can recall turning in was something I desktop published in the paint program Doodle (by Mark Rubin) for a 7th grade creative writing class (circa 1983 or 84, when I was 11 or 12). You can see a posting of the newspaper-mimicking result (sans the final body text) about halfway down this page on the old version of our Website. [Although I believe I was the first to produce such computer-generated output in my school, I clearly failed to predict the demise of the newspaper, although I did try to adjust for inflation (also, badly, because I don’t think you can buy a newspaper even now for that cheap).]

My productivity was still limited by poor, unstable software, as well as my inability to type, although I thought my two-fingered typing was hot stuff at the time, so learning wasn’t necessarily all that important to me (ironically something I think my oldest of three daughters, who is turning 12 soon, also believes at the moment). Learn I did, though, thanks to a keyboarding class using electric typewriters, which I believe happened in 8th grade, which would place it circa 1984 or 85. In addition to my skepticism that I was already a good typer, there were two other standout moments for me from that class. The first was when the teacher wrote the @ symbol on the chalkboard and asked us if we knew what it was. I had actually known what that strange symbol was from an incidental exposure earlier in my life, and, when I correctly identified it as the “at” symbol, the teacher was incredulous that I didn’t cheat by looking later in the lesson book. The other was towards the end of the semester, with the teacher wheeling in an Apple II computer for evaluation and being frustrated by an inability to access a screen to just type on. I consulted with my friend Brian who had an Apple IIe at the time and found out how to break out to a BASIC prompt, which did allow her to type, but was not what she wanted. Clearly, she wanted it to go straight into a blank screen so she could type freely. Naturally, that wasn’t possible on most early computers, unless they were something like the Commodore Plus/4, which had a primitive word processor built into its ROM. I don’t recall her making use of the Apple II again (due to obvious lack of training and software, I can’t blame her).

With my skillset growing, I still was limited by the technology at my disposal. One of the bigger offenders was my Commodore MPS-803 printer, which was a budget dot matrix printer. Unlike some of the more expensive dot matrix printers, the little dots it printed to make up letters was pretty low resolution, using only 9 pins to form its letters, plus it didn’t really allow for lower descenders like a “g” to go below the line (among other issues). One trick I picked up from a magazine (likely Family Computing, but I’m not sure) was if you printed on carbon paper the carbon copy would sort of blend the dots together, creating the illusion of higher quality output. I used that trick quite a bit, but it still didn’t make up for the relative lack of quality and the expectation of many teachers that if you didn’t hand write something, that the output quality should match that of a typewriter (there was some computer snobbery, of course, but the output that most of us were able to generate really was subpar).

A big change for me came when, circa 1987 (I was now in high school), after my original Commodore 64 was struck by lightning (it still worked, but the graphics were a bit corrupted), we replaced it with a Commodore 64c, which came bundled with GEOS disks. This was a Macintosh-like (but color) operating system with built-in word processor and paint program (all on a 64K computer with single 5.25 inch floppy disk drive!). The best part was that not only was the word processor GUI-based, but it was also WYSIWIG, so what you saw on the screen, be it fancy fonts or graphics, was exactly what you got on the printed page. The software accomplished this feat by bypassing the printer’s native output and printing everything – including text – as graphics. Combined with the carbon paper trick, you got something approximating the output of a laser printer, although obviously with less saturation and detail. Nevertheless, this was finally something I could semi-regularly use to turn in school papers.

While this was all a big improvement, the next changes came via two new computers, one forward thinking, and one that was something of a throwback. I’ll talk about those and more in Part 2. 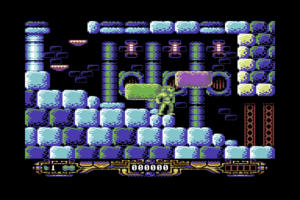 Soulless title screen Over the past several years, there has[...] 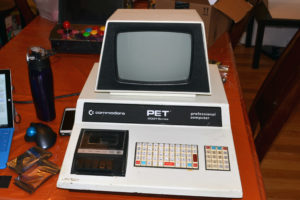 I recently received the PET microSD with datasette power and[...] 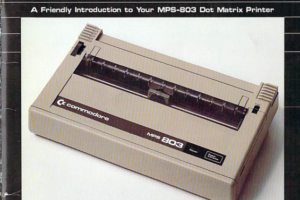